2nd edition of the Summer Scriptwriting Base

Humanity has unquestionably one really effective weapon—laughter. Against the assault of laughter nothing can stand.
— Mark Twain

As soap is to the body, so laughter is to the soul.
— A Jewish Proverb

“TO DIE LAUGHING” is an international educational forum for scriptwriting, which will take place in Bozhentsi (Bulgaria) from July 29 to August 9 this summer. The village of Bozhentsi is a traditional Bulgarian village and an architectural reserve. The participants will be housed in traditional 19th century houses. Other locations of the Camp will be Sofia, Gabrovo and the world famous abandoned monument of Buzludzha. The forum is destined to students and young professional of all artistic fields and creative industries interested in developing their skills and knowledge in writing scripts for theatre, cinema, contemporary dance, and other cross-disciplinary and cutting-edge art forms. It will also allow the participants to meet future friends, partners and collaborators from all around Europe.

As the famous American comic actor and writer Sid Caesar said “If you have no tragedy, you have no comedy. Crying and laughing are the same emotion. If you laugh too hard, you cry. And vice versa.” In the practical workshops of the program of “To Die Laughing” the participants will explore the meeting point of the comic and the tragic.

Starting point of the practical work will be the visit of Buzludzha monument (often voted “the most surreal and weirdest abandoned place on the Earth”) and the lecture and the exhibition curated by the Serbian philosopher and art historian Marko Stamenkovic in Gabrovo’s House of Humor and Satire. The exhibition is called “To Die Out Laughing” and it is a word play on the expressions “to burst out laughing” and “to die laughing”. It draws from a selection of visual materials from contemporary art across the globe and it addresses historically and culturally diverse interactions of seemingly unrelated phenomena with the aim to contest what is considered legitimate forms of knowledge. This visits and lecture will give material to work with during the workshops that follow: scriptwriting for theater, for documentary movies and for a physical approach to writing. In the program of the Summer Base there will be also another three very interesting lectures which are destined to open new fields and to give new ideas for writing people: writing for video games and interactive platforms, writing theater texts out of scientific materials and creating “theatrical” mobile phone applications. All the lectures of the program will be free and open to public.

The lecturers and the mentors are renowned and innovative practitioners from all around Europe who have been carefully chosen for this event.

The program of the forum will be open to foreign participants as all lectures and workshop will be in English.

One of the main goal of the “To Die Laughing” is the materials created during it to become a base for future collaborations and productions in theater, cinema, dance and all sorts of possible cross-disciplinary projects. 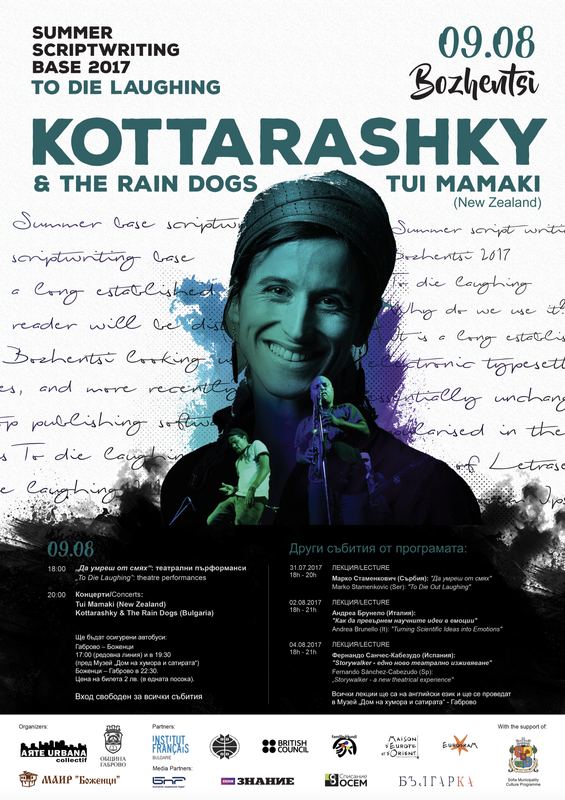